Leaves were glowing in shades of red, orange, and gold the weekend my sister, my daughter, and I made a trip to Lancaster County, Pennsylvania. We went for the shopping where numerous boutiques, outlet malls, antique marts, and other unique shopping spots fill the small towns and roadsides of this traditionally Amish area west of Philadelphia. 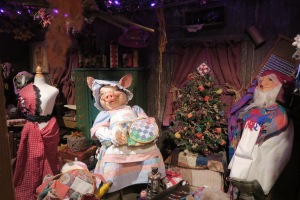 Christmas shops at Christmastime are usually jam packed with loud and happy (and sometimes loud and cranky) children, all clamoring this way and that, leading their parents and grandparents in what appears to be a race to the finish. But in early to mid-October, families are focused on Halloween pumpkins and trick – or – treat costumes and Christmas has yet to cross their minds.

The three of us spent an entire Sunday morning at the National Christmas Center.  Although a tour bus was unloading when we arrived, we held back and waited a couple of minutes and soon the tour group was well ahead of us. We shared the displays with only two or three other visitors.

The building doesn’t look particularly large or impressive from the outside. But inside the National Christmas Center, 20,000 square feet is filled with fifteen huge and highly detailed galleries of life-sized Santas, elves, whimsical animals, historical characters, Nutcrackers, storekeepers, nativity figures, and more.  All take their places in a series of holiday vignettes that tell the tales and the legends of the Christmas season.

Animated reindeer greet visitors to their stalls as the elves busily build toys and wrap holiday presents inside Santa’s shop. An audio recording tells the story of the little girl, Virginia, who asked a big question, and the newspaper editor who crafted a thoughtful answer. In a re-creation of a 1950’s Coca Cola ad, two children spy on Santa at the fireplace. And a walk through the ancient streets of Bethlehem lead past doorways and scenes of daily life and ends around a final corner where visiting shepherds and kings have come to see a newborn baby lying in his mother’s arms.

My favorite display however, was the re-creation of an old-time Woolworth’s five and dime. It quickly brought back memories of my childhood Christmastime visits to the store where  Christmas toys and merchandise dazzled young shoppers. The shelves and bins of this display are stocked floor to ceiling with familiar treasures. It’s the display where I spent the longest amount of time and even so, I couldn’t begin to take in the overwhelming amount of old-time finds that have been collected here.

Room after room is filled to the brim. There are store windows to peer through;  there are decorated trees to admire. Electric trains chug their way through an elaborate mountain setting of villages and holiday landscaping in a room lined with display cases holding every kind of train car imaginable.

Between galleries, walls are lined with the history of Saint Nicholas and photos of Santa as he has appeared down through the years.  At the end of the self-guided tour, you enter the gift shop where delightful ornaments and other baubles are hard to resist.

If you’re a Christmas junkie, as I am, or even if you’re just a casual observer, this is a not-to-be-missed stop during the Christmas holiday season or, even better, during the off-season when you’ll be able to enjoy each vignette at your own pace.

The National Christmas Center is located at 3427 Lincoln Hwy, Paradise, PA 17562.   See their website for hours and information.