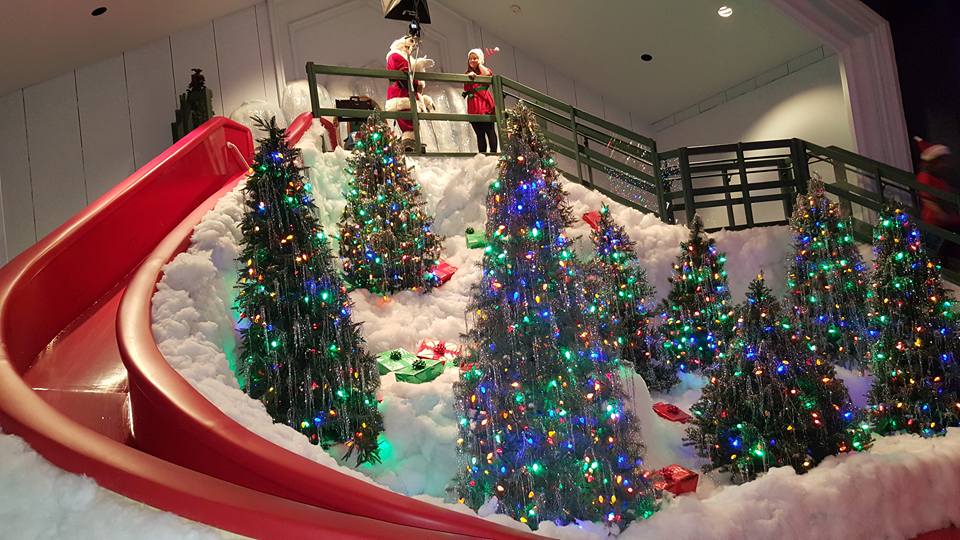 Medina, Oh is a cute little town where one can easily spend a day browsing the many shops plus an antiques mall. Also in the downtown area is a local Christmas attraction called Castle Noel. Castle Noel is owned by Mark Klaus, a sculptor whom I first became familiar with when he was selling his beautifully detailed Christmas ornaments on one of the home shopping channels several years ago. I found Castle Noel on the internet. It claims to be “America’s Largest Indoor Year-Round Christmas Entertainment Attraction.” My guess is that this statistic measures square footage only.

Knowing little else about the place, my adult daughter and I walked in one afternoon in mid-November and joined a late afternoon tour. The tour is the only way to see “the castle” and the tour is difficult to describe. I’ll start by saying that the price of $17 for adults was pretty steep for what you are getting.  But, no matter, we bought our tickets and off we went with a group of about a dozen, mostly senior citizens and a couple of kids.

I’m not sure why it’s called a “castle.” It’s an old brick building and there doesn’t even seem to be artwork that would simulate the idea of castle walls. Most of the tour, in fact, takes place through darkened hallways with only the displays being lit. The tour isn’t designed for kids. There are things that kids might like, but I’d guess that kids would be bored with most of the displays. It isn’t designed exclusively for adults either. There are parts that are way too “cheesy” for adults– even for me, the queen of cheese.  Castle Noel is a strange place that has a rather unprofessional, backyard carnival feel about it. The tour is supposed to take about an hour. Ours lasted an hour and a half. Most of the displays are of 1960’s-80’s-ish memorabilia–displays of old toys plus costumes from holiday movies. They have one of the RV’s that was used during the making of Chevy Chase’s Christmas Vacation. There is a section where New York store windows have been rescued and put on display. And at one point, you are led through a store room of works “in progress.” If you are a memorabilia buff you may enjoy the first hour. If not, you’ll suffer through to the end which was the best part.

The final stop of the tour takes you into a large warehouse room packed with memorabilia and decor where the department store slide from A Christmas Story has been erected. Everyone follows in “Ralphie’s” footsteps, waiting in line and climbing the stairs to visit with Santa on his throne. And then, at the end of your visit with Santa, you slide down the slide to the snowy, cotton-y bottom where you have the opportunity to buy the photos that have just been snapped, the first with you sitting on Santa’s lap, and the second as you begin your ride down the slide.

The ride down the slide was, in my opinion, super-cool and worth the price of admission. The rest of the tour was a bit cheesy, moderately interesting, and it moved too slowly. It would be preferable if, instead of a tour guide, they would just tag the display with informational signs and allow everyone to move through at their own pace. There are places I would have chosen to linger longer and displays I would have dashed past.

After the tour, you exit through a very neat and tidy gift shop. Most of the merchandise lines the outside walls leaving most of the floor space that you would expect to be lined with racks of ornaments and decor items, empty. The gift shop only adds to the weird feel of the place. You can buy the detailed ornaments of Mark Klaus here along with some other unique merchandise like the Griswald’s moose punch cups from Christmas Vacation.

Would I recommend a visit? Maybe. If money isn’t tight and you’re in the area, you love memoribilia and holiday movie props, or if it’s worth a drive for you just to go down the Christmas Story slide, then go for it. I’d probably leave the youngest kids with a s