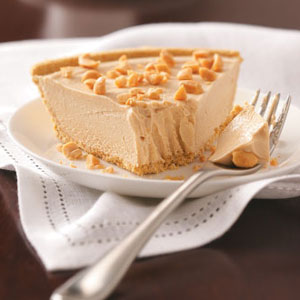 In the early 90s, I completed part of my college coursework locally, at one of Kent State University’s branch campuses. I worked at a local bakery in the morning. In the afternoon I hurried off to classes. Those were fun days filled with friends and a heavy schedule of student activities (I was student body president one year and served on the student Senate for a couple of others). Once a week or so, between classes and committee meetings, my two best friends, Julie and Kathy and I enjoyed having dinner at a local restaurant. One of our favorites was right next door to the bakery where I worked. It was an Italian restaurant called Caruso’s.

Caruso’s was a popular place that served big plates of spaghetti and baskets of fresh bread (baked in the bakery ovens next door). If you still had room for it, one of their most delectable desserts was peanut butter pie. Rich, smooth and creamy, it was a dessert to die for. In the years that followed, I moved on to finish my degree at the main campus in Kent, Ohio and dinners at Caruso’s became just a memory. The pie was a memory that I couldn’t forget. I hunted down recipes and tested pies until I found one that was as close to my old favorite as I could find. This is it.

The original recipe that I found calls for a chocolate cookie crust but that, for me, is overkill. The pie filling is sweet enough without adding more sugar. Instead, like Caruso’s, I pour the filling into a traditional pastry crust. It’s the perfect compliment to the rich filling.

Prepare your favorite pastry crust or use the basic recipe below. Let crust cool while you prepare the filling.

Whip the heavy cream and set it aside. In a second bowl, beat the cream cheese, peanut butter, sugar, butter and vanilla until smooth. Fold in whipped cream. Gently spoon into the crust. Garnish with chocolate shavings or whipped cream if desired. Refrigerate and allow to set for at least one hour. The pie is best eaten the same day that it is made.

Sift together the flour and salt. Cut in shortening with a pastry blender until pastry forms pieces the size of small peas. (Take your time and don’t shortchange this step. The more time you spend cutting in the shortening, the flakier and more tender your crust will be). Sprinkle water, one tablespoon at a time, over pastry and blend in until you have a moist  dough that will hold together. Form into a ball. Let it rest in for at least 30 minutes.(Resting will make it easier to roll and it won’t shrink as much when baked.). Roll into a crust to fit your 10″ pie pan. Prick the bottom crust with a fork. Bake at 475° for 8 to 10 minutes until lightly browned.